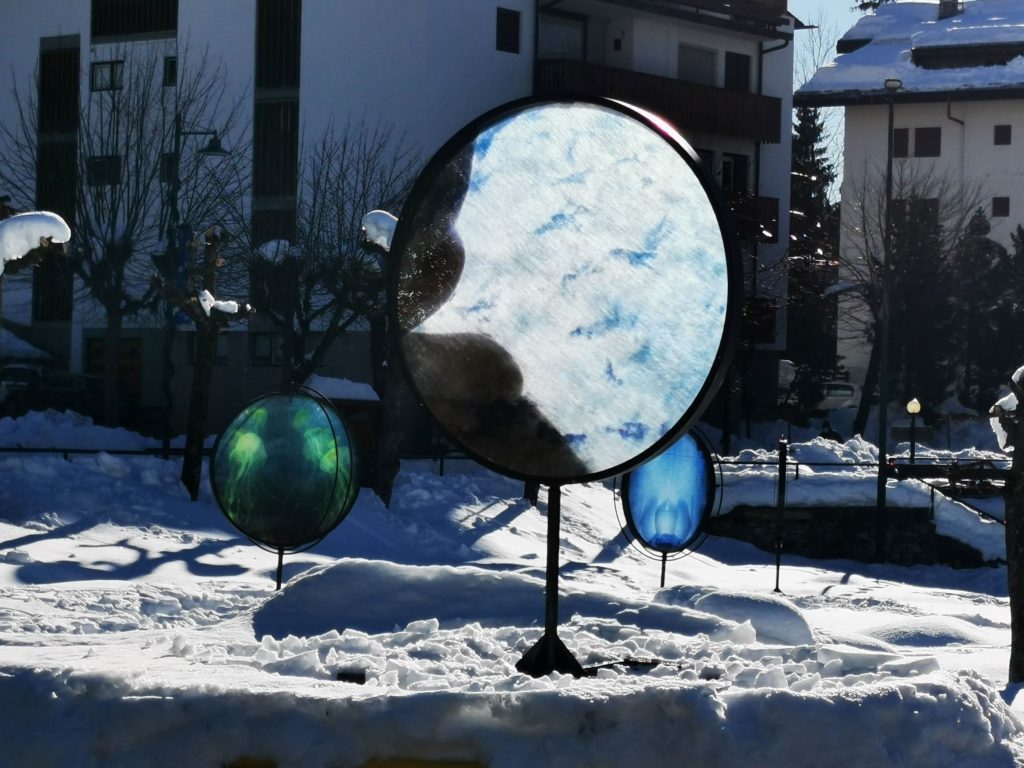 Rosa Mundi builds a particular armillary sphere, consisting of three elliptical iron circles, set one inside the other, formerly circular rings of the ancient fifteenth-century barrels kept in the magical atmosphere of the ancient wine cellars of the Morsasco Castle, in Piedmont on the Via Francigena. Each of the three circles outlines a sphere with its own imaginary ecliptic. The first, starting from the heart of the armillary, is divided into sections corresponding to the twelve signs of the Zodiac. The armillary sphere was intended to show both the precession and the so-called trepidation of the equinoxes, so popular in the 1400s. The original theory of the Greek astronomer Hipparchus, in the second century BC, on the different time taken by the sun to reach the equinox, from spring to spring, recognized a slow movement of the stars, parallel to the ecliptic, in the opposite direction to the diurnal motion such as to give rise to the displacement of the equinoctial points of spring and autumn. This theory was called the precession of the equinoxes. In the following centuries, Arab scientists thought about timing the shift of the equinoxes with a faster advancement from 1 to 66 years, compared to that of Hipparchus, i.e. from 1 to 100 years, until they theorized a change in the speed of precession, as if this was a function of time which had to be determined on the basis of observations. With his installation Rosa Mundi therefore investigates the game of time in astronomical investigation which, as a mathematical variant, must consider the risk of the inevitable succession of the imprecision of human calculation. At the same time, the play of forms, coined and defined by human thought, must be added the further unknown of the obliquity of the ecliptic, which is also variable. The artist creates a historical and emotional link between the present, the past and the future, where memory reigns supreme between the fibers of his works and the viewer’s gaze. Along the internal walls of the works, an inscription in natural fluorescent tempera reveals the secret message of the work of which the collector is called to be the main guardian and ferryman.

In Krak des Chevaliers for Rosa Mundi he interprets the light behind the wall, strong and sharp, capable of penetrating everywhere. Krak des Chevaliers represents the eternal dialogue between the living stones of history with human experience that is cyclically composed, decomposed, and recomposed. A symbolic place of Syria, the castle stronghold of the warlords at the same time a place to build peace near Homs, the medieval castle par excellence of the Crusader era. Two small slits hold back the light, indicating the road to peace at certain times of the day and transforming a cannonball into a soft circular sponge

Humanity’s Condition is the first of the armillary spheres of the evolutionary artistic project created by Rosa Mundi for a time span of twelve years. The project finds its origins in the creation of the video art work called Humanity’s time life in which Rosa Mundi wanted to narrate the history of humanity as a sort of Tabula Cebetis, that is, an infinite narration of life, allegorical-symbolic, based on the which men, passing inside three circuits of walls full of personifications of vices or virtues, aspire to reach the hill of Happiness. The drama of immigration, the abandonment of one’s land, crossing rough roads and stormy seas, wars and dangers of all kinds in search of serenity, peace and happiness. In the first work, the depiction of a man writhing in the bottom of the sea, in the abysses of his thought and in the clouds of the sky of the firmament emerges., A bubble or a floating planet in the sea universe of the firmament’s existence. Rosa Mundi’s first armillary sphere was conceived and built for the Castello di Morsasco seat of her atelier through the recycling and reuse of the irons of the ancient barrels of the 1400s and the crushing and regeneration of old glass bottle waste.

With Point de vue the artist investigates human perception beyond the boundaries of reality, between the origin of the
gaze, imaginary knowledge and the targeted object. The observer’s point of view shapes the observed object. Often laden with a foresight, a pre-judgment, an interpretative pre-constitution that changes the object itself and the memory of the experience is added to the concrete reality that becomes the mother and generator of other realities, numerous and manifold. A cabin on the top of a hill covered with a ship lends the image of a naked breast open to the sky in a human and personal dynamic of seeing what we want or imagine we see.

Magdala is a word and a name that brings us back to the history of Christ, it is the name of a woman among the most important of the New Testament, it is a city and is today one of the most interesting archaeological sites in Galilee and in the whole Holy Land. Magdala is the archetype and stereotype of an idea of woman and human existence, generated by a transparent stratification of prejudices, of legal necessities and government commands, in perfect non-compliance with reality, true history and what happened. . Magdala by Rosa Mundi represents the infinity of history on the move, masked and covered that wanders within the perceptions of the world of yesterday, today and tomorrow that rotates, imperfect in quinoxial trepidation, within the armillary sphere

In Resurrection, the artist performs a double operation, that is, he reveals and reveals the evangelical moment more intimate and mystical than the passages of the New Testament. Three women are the first messengers of the Resurrection of Christ to the disciples: Mary of Magdala, Joan and Mary of James.
The angel tells him “go, tell his disciples and Peter that he is going ahead of you to Galilee. There you will see him, as he told you ”(v. 7). The verb “precedes”, in Greek, is “proaghei” which meansgather and lead. Resurrection is the moment, which will last for centuries, the moment when Jesus gathers his disciples again to confirm their faith in him by calling them to be witnesses all over the world. Galilee thus becomes a symbolic place of regeneration and of Jesus’ preaching, a prelude to the missionary nature of the Church towards the people. History then it does not end in the sepulcher, but explodes in the tomb because Good Friday is not the last word: the last word is Easter, the triumph of Life, the victory of Good over evil”.

In Meduse and Rosone, also present in the version of the “Drums” as well as the armillary spheres, it explains in a figurative and sound way the artist’s perception in the human and animal being, aligned in space like a floating planet in the infinity of the universe . The jellyfish come out of the sea and head towards the sea universe, enclosing the rose window and the universal judgment of man’s destiny highlighting the metamorphosis of the spatial concept. The cardinal points are rarefied and the below and the above lose all reference points in a spatial perspective of the universe and of the world floating in space and us on it.